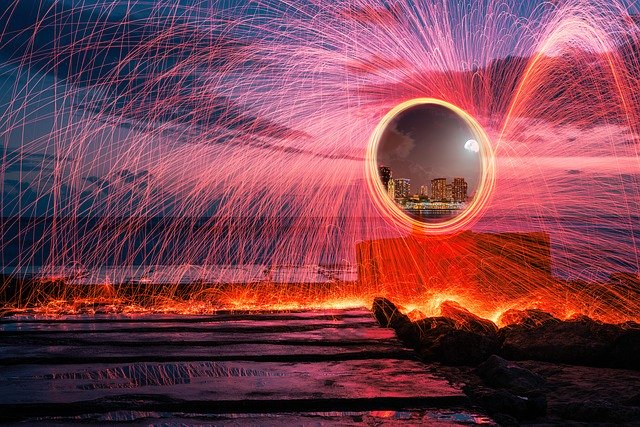 Originally published in the first issue of Cicatrix magazine, 2016. Dedicated to the memory of Jønathan Lyons, founder of Cicatrix Publishing.

If only. Yes, if only. During an empty hour this thought may befall us. While some ideas may never occur to the most vacuous among us, the relief or regret that comes with mulling over our own biographies is universal. Only someone without an idle moment could resist the temptation to wonder – if only.

He saw her sighing in its bifurcating blue beams, dancing in its refracting red lights, and smiling warmly with the neon flares flickering along  to the rhythms of the CPU. In front of this marvel of modern physics stood a thirty seven year old man, the purchaser of the obsolete T30, who marveled at his talent for restoration. An inveterate tinkerer,  he was not one to throw away anything remotely salvageable.

In the early 2050s he was fortunate enough to find employment as an independent contractor to several electronics manufacturers. Production had been largely automated two decades before, and most of the repair tasks happily handed to machines shortly thereafter, but one human was kept  around to handle catastrophes, which remained more commonplace than the techno-evangelists had anticipated.

Installed on every computer was a distant descendant of a sloppily assembled operating system bought by fledgling firm in the early 1980s. For over 70 years managers hoped, through some undiscovered form of Lamarckian evolution peculiar to hastily written software, the increasingly bloated kernel would become better by crashing again and again. He peered out at the houses by the ocean. They sat there, just a few miles from his brown brick tenement, trying to laugh at the squalor in which he found himself.

Any number of people and institutions could be blamed for his situation, but there is no point in thinking about what might have been. The vision of Cheryl was overtaken by the sight of her fiance, the mogul who owned half of the factories in town. Upset by this, he stepped outside and sped briskly to the sensory stimulation emporium.

By dusk the streets were always empty. They seemed to become less busy each week. The silverware photographer next door had purchased a companion robot in March and would be making payments for fifteen years, although the warranty is only good for five. Our nearly middle aged mechanic, though he knew these electronic accessories were merely ways of manipulating organic robots (and that they fit perfectly with his personal ethos of synthetic joy for all – including himself), could not embrace them.

He had let the headset at the emporium lull him into a long and pleasant trance. Though he visited roughly every other day,  the idea of having a virtual reality device in his own home made his stomach sink. Yes, it really was no less or more real than what he normally did, or at least that is what they told him, but it seemed wrong. It seemed like an act of self-deception. Most could exercise some moderation,  but he knew himself too well – or perhaps he was afraid because he did not. After buying one he would subsist on the basic income provided by the government and forget about his other aspirations. Yet if he could not muster the courage to approach her, what was the point of living? If courage came to him she might forsake the tycoon for someone who adores her. Yes, if only.

It had been twenty five years since the family vacation to Mars. The violet lake carved out of the terraformed but still ruddy surface had burned itself into his memory. It was the background, and occasionally the centerpiece, of many airbrushed reminiscences. The T30 was a cylindrical machine, slightly over seven feet, with diamond-shaped lights encircling its tip and base. In other words, its appearance was identical to nearly every teleporter designed before and after the technology was perfected. It seems the comic book artists of yore were either abnormally prescient, or the designers of not too long ago were deplorably lazy. His hand nimbly inputted seven digits into the T30’s ancient-looking console. Even with the newer models there were mishaps, yet some sort of unspeakable annihilation in an uncharted dimension did not diminish his faith in his hard-earned prowess.

As he stood in the middle of the apparatus’s silver interior and watched the brilliant swathes of cerulean light swirl around him he wished he had been raised on the red planet. It was young and vital. Its pioneers had had to fix their own tools and grow their own food. Before he was aware of it, he had horizontally reconstituted in the velvet tube in the bustling transportation hub of the Martian capital. As the door opened he sat up, or was propped up, and loudly commanded by an automatic message  to make room for the next traveler. Hotel brochures flooding the air with clashing fragrances and haphazardly projecting holograms that occasionally quarreled with one another lined the walls of the entrance. None of them were remotely affordable to an earthling carrying green earthling paper.

The forest near the golf green looked hospitable enough. Mars’s fresh lakes and streams were teeming with trout, catfish, and sundry of other aquatic delectables. Noodling shouldn’t be dangerous here. At least the Martian founding founders, who must have hailed from Florida or Australia, had had the foresight to implement a ban on reptiles and arachnids.. No snapper heads, snakes, or gators to contend with here. He plunged into the water and fingered the rock formations in search of a welcoming orifice. Hallucinations of lullaby-like piano chords resonated with the smooth stillness of the cool water engulfing his emaciated form. As he swam deeper, deeper than many seasoned noodlers would go, he came upon a cavern.

He slid his arm into it to let the cave’s agitated tenant sink its tiny teeth into his arm. It wouldn’t budge. His uncle made it look so easy.  The slimy bastard won’t let go. The trifling sting from its fangs faded as the intrepid noodler struggled to break free. After hitting the little leviathan between its eyes, it tightened its jaws with an alarming resolve. Once the diver made peace with his impending suffocation his arm simply slid out. The first gulp of air tasted like salvation; the mixture of fright and gratitude lubricated his prematurely stiffened joints.

It was then he decided to cast his fears aside and approach Cheryl. Hurriedly he made his way back to the teleporters, drenched but numb to the AC, leaving a trail behind him.. A herd of pasty tourists slipped on the water and knocked their comrades off their feet; a doughy game of dominoes had been initiated by his carelessness.

A hand tapped his shoulder.

He turned around and saw his own face. Both men initially recoiled, not sure if the other was a long lost twin or a spy planted by some nefarious (and very bored) agency to drive the other mad. The assessment period ended when they lunged toward one another—when dealing with a clone social niceties are irrelevant, you’ll understand when you meet yours—and stared intensely into each other’s eyes. More timid men may not have done this so soon, but he had the blinding rage that can only crystallize under the pressure of decades of thankless work, and can only rupture when it is confronted by what it hates most.

“Clones are not important. It is time to proclaim my – our? – undying love!”

A brief smudge in experience, then the Original rematerialized in his home. An unpleasant odor permeated the shoddy studio apartment. It was hard for someone so simultaneously shaken and reinvigorated to tell from whence it came. A gaunt figure wearing a VR headset sat in a half-lotus position on the living room floor.

The naked version of himself was one of several copies made in the his absence. As the barechested libertine tossed another fistful of euphoriants down his throat he explained one of the copies, emboldened by a close call in the shower, had run down to see Cheryl. Her rebuff sent him back to the bathroom. The bewildered first born opened the door to find the rejected suitor covered in colorful foams pouring out his mouth while seven plump cockroaches feasted on his excretions. They closed the door. It is best they let maintenance handle it.

The sight elicited a sinking feeling in both of them, who together, and at once,  remembered how terrible it was to realize how a single move could seal victory or guarantee defeat. So much depends on so little. It is hard to see how or why this is. John ambled over to the teleporter, much to the bemusement of the intoxicated nudist.

“What are you doing?”

“Let’s make some more. One of them will get it right.”

To an Antique Land: A Scifi Short