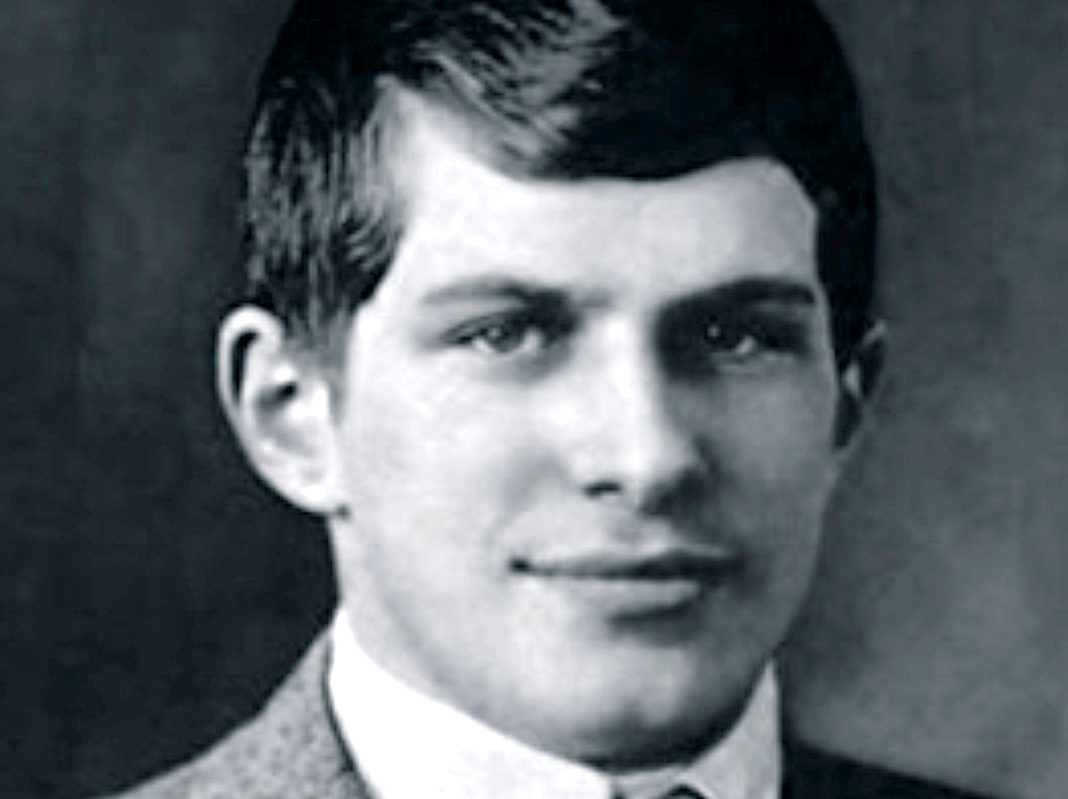 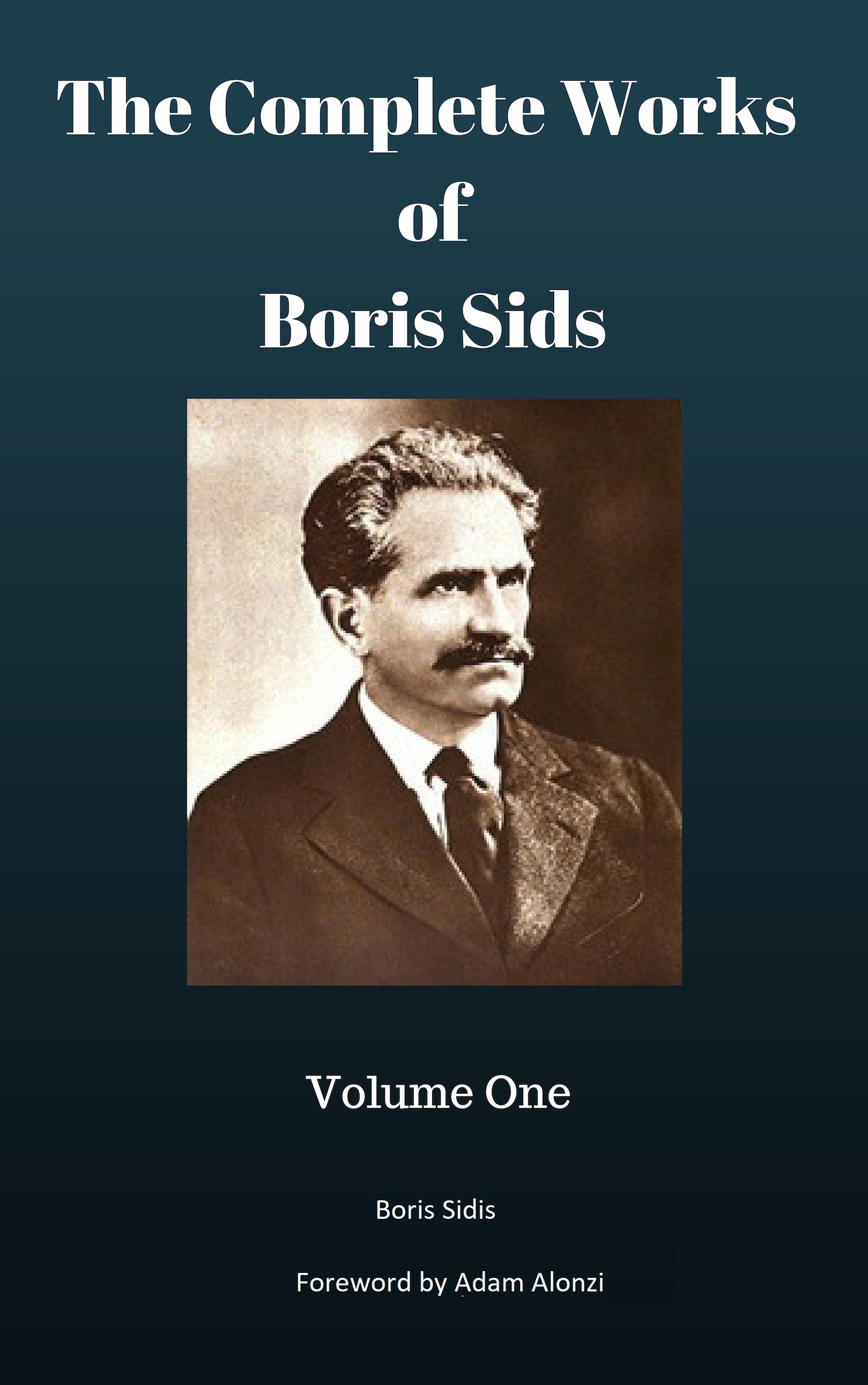 Available on Amazon and Smashwords.

“They wouldn’t do this for me…If they call me a genius, what superlative have they reserved for your husband?”

-William James to Sara Sidis after Harvard’s waiver of multiple PhD requirements, including an oral exam, for Boris.

Boris Sidis, one of William James’s personal friends and favorite pupils, is a pivotal but, for reasons that will be enumerated here, forgotten figure. A touching tribute to the  doctor (Bruce, 1910) was published in the Journal of Abnormal Psychology:

“Sidis was one of the first to undertake a really scientific exploration of the subconscious region of the mind, and his findings therein were both varied and of practical importance. His formulation of the law of reserve energy and of the principal factors in suggestion, his demonstration of the value of the hypnoidal method as a means of gaining access to the subconscious, his exposition of the part played by the self-regarding instinct and by over-development of the fear instinct in the causation of psychopathic maladies, would alone suffice to give him a conspicuous place in the history both of psychology and of scientific psychotherapy.”

For defying the Tsarist decree against teaching peasants Boris was sentenced to two years in a cell that could not accommodate the length of an ordinary man’s body. Instead of breaking his spirit, it only fueled his hatred for tyranny and his determination to combat it whenever it reared its head. Later he credited this period of solitary confinement with his immense capacity for concentration. After fleeing to America, Boris went through a series of menial jobs to support his independent reading at the Boston library, the first sight of which he likened to  “the gates of heaven” (Wallace, 1989). During this time he met a young woman whose family had fled the Russian pogroms. Sara, who aspired to become a medical doctor, needed to pass her entrance exam. Boris tutored her. She would eventually become his wife. In line with other accounts, one colleague described him as a man who “had a very active and forceful mentality…and possessed a genial and kindly nature, but was apt to express his opposition to what he considered fraudulent or dishonest with abruptness and vigor. He was of a retiring disposition, and did not seek a following of pupils. He made few contacts with his colleagues, but the few friends he did make, among them Morton Prince [q.v.], were his loyal admirers” (Linenthal, 1923).

The four works selected for this volume cover the breadth of his thought while remaining accessible to the layperson. The Psychology of Suggestion is as engaging and provocative as any modern work on hypnosis, from its detailed investigations into the  subconscious to  its closing chapters about the historical, sociological, and economic consequences of our “subwaking selves.” It is important to note that Sidis was not just writing as a theorist, but as an esteemed clinician who had treated droves of patients, some quite disturbed, with stunning success (Bruce, 1910). Compared to the permissive, varied, and occasionally bizarre techniques employed by Ericksonians (Battino and South, 2005) some hypnotists may find his inductions – which involved asking patients to follow a monotonous sound like a metronome or letting them guide themselves into trance by narrating their thoughts –  boring or primitive. They nevertheless served his purposes.

Nervous Ills: Their Causes and Cure is a stirring counterpoint to the prevailing psychoanalytic prescriptions for anxiety, depression, and related maladies. Although it was published long before the first DSM, the sorts of neurotic ailments described in it should be immediately recognizable (he was, like any good medical professional, an astute observer). Near the outset Sidis calls psychoanalysis “a sort of Astrology, full of superstitious symbolizations, dream vagaries, and idle interpretations, foisted on the credulous, on those obsessed by sexual inclinations, and on those suffering from sexual perversions…psychoanalysts care for nothing else but the fulfillment of sexual wishes. It is useless to argue with psychoanalysts, who as a rule possess no more critical sense than Mormon saints.” Earlier in an academic journal he’d written “some of Freud’s admirers, with a metaphysical proclivity, are delighted over the theory of repressed wishes. The wish is fundamental and prior to all mental states. This piece of metaphysical psychologism is supposed to be based on clinical experience. If wishes were horses, beggars would ride. The Freudist manages to ride such horses” (Sidis, 1911).

An enraged Ernest Jones promptly sent a letter to James Putnam: “Sidis’ remark is of course unpardonable, and Prince should not have allowed it to be printed; one will be bound to ignore him in the future.” Psychiatry was not the only area where Boris confronted implacable dogmas and unapologetic dogmatists. At this time Philistine and Genius is his most widely read book, perhaps because it is brief and requires no specialized knowledge to understand. Its popularity may also attributable to its continued relevance as a critique of American culture and its connection to the controversial child-rearing methods he and Sara famously applied to their own son. Its excoriation of public schools, the American obsession with athletics, and the then accepted forms of parenting struck several nerves at once. Its tone, which occasionally veers into indignation, did not resonate with most readers. The overriding belief in the tremendous potential of every person the piece extolled was ignored; he’d condemned himself to being forever pilfered as an elitist for attacking the baser (and, in his opinion, perfectly remediable) parts of commonness.

His accomplishments were not limited to pedagogy or psychiatry. Dr. Bruce did not recognize (being without a crystal ball, how could he?) the significance of The Theory of Moment Consciousness. While James’s influence is undeniable, the piece contains its share of original insights. Moreover its contentions, particularly those about hierarchical processing, seem to (at least superficially) mirror those made decades later by Newell, Baars, DeHaene, and other proponents of Global Workspace Theory (Baars and Alonzi, 2018) as well as  “dynamic core” models (Damasio, 1999). His work was expunged from the records by the moratorium placed upon the use of words like cognition, memory, and scores of other terms he, his teachers, and hundreds of generations of men and women have used for thousands of years to describe the subjective states all sentient beings experience. Because mental states could not be directly observed, they were deemed unworthy of serious inquiry, or formal recognition, by Watson, Skinner, and their followers (Baars, 1989). Even with the advent of advanced neuroimaging techniques the scientific study of consciousness remains woefully – or delightfully – interdisciplinary. Sidis saw the inextricable interconnectedness of all fields of knowledge. This is one of his strengths. It consistently shows in his writing.

His atheism, Jewish ancestry, fervent rejection of Freudian psychoanalysis, isolationist position towards American intervention in the First World War, opposition to eugenics, and obvious theoretical and methodological irreconcilability with the rising tide of Behaviorism in research psychology all conspired to ensure his alienation from society in his lifetime as well as the posthumous interment of his achievements. We must count his son, arguably the greatest child prodigy in recorded history, among them. However, Billy was another contributing factor to his father’s fall from grace. Worse was that after graduating from Harvard William James Sidis, who had been a regular source of sensationalized stories for the press, led an adult life that did not seem to meet the expectations set by his boyhood feats.

Maybe the lad cracked under pressure? Likely not. Boris had more in common with a modern Montessori instructor than James Mill. Long before William entered his teens the newspapers had decided he was bound to have a nervous breakdown. Before he was of grade school age they decided Boris’s methods would ruin his son’s health. A significant portion of the claims made by the Yellow Press were either exaggerated or, even more often, completely fabricated (Wallace, 1986). Had they bothered to acquaint themselves with Sidis senior’s views on education they would have known he did not just discourage cramming, but “study” itself. Learning was best, he claimed, when it was effortless; genius begins when instruction becomes indistinguishable from play. A precocious polyglot, an astounding mathematician, and a Harvard freshman by the age of 11, Billy’s IQ is estimated to have been between 250 and 300. This amused his father, who dismissed intelligence tests as “silly, pedantic, absurd, and grossly misleading (Sidis, 1914).”

Extant photographs present us with a severe man standing in the stalwart fashion of someone who has spent their life upholding an ideal, a Hercules at once fatigued and emboldened by his labors. Perhaps he was too ready defend himself, too uncompromising in his commitments. The search for truth sometimes has to give up its seat to diplomacy. Although Boris disliked organized religion, he had an impressive command of the scriptures of more than one religion. He read the Hebrew Bible, the New Testament in Koine Greek, and the Sanskrit epics of India. He also regularly spoke with holy men of different faiths. Like any serious student of history or crowd psychology he was acutely aware of the darker features of the human mind, but there are few proponents of human potential as optimistic as Boris Sidis. Thus he differed from Freud not just in his picture of the subconscious, but in his very conception of human nature. In this respect, if no other, there are few who could be considered a more worthy successor to the aims and spirit of the psychology propounded by his cherished friend and mentor, William James. One wonders how psychiatry and psychology in the twentieth century would have developed had their torrents been tempered more by Boris Sidis.

Damasio, Antonio. “The feeling of what happens.” Body and Emotion in the Making of Consciousness (1999).

A Review of Superforecasting by Philip Tetlock