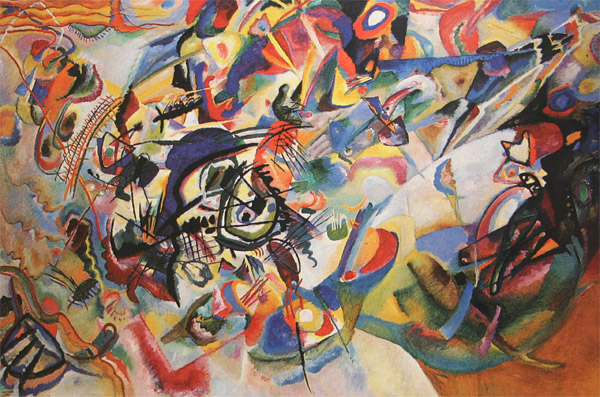 Wassily Kandinsky was a Russian painter and visual theorist who generally considered the first abstract artist in the modern sense. Du Spirituel dans l’art was published in 1912. It outlined his views on color, composition and the duties that accompany creative ability. Ruskin he is not, but there are gems of wisdom in his manifesto. For some reason artists in the early twentieth century felt compelled to propound their vague and sometimes contradictory views on the purpose and nature of their craft. An aspiring creator or seasoned connoisseur can endure his pompous pontifications. Here I’ve provided a condensed version of Kandinsky’s classic, brief but occasionally melodramatic essay. I’ve even included pretty pictures, which, unfortunately are not in the kindle version. Enjoy.

“He will not be able, with sincerity, to say that such a passage gave him such visual impressions, or such a harmony roused in him such emotions. The effect of music is too subtle for words. And the same with this painting of Kandinsky’s.”

“It will be no easy matter to conquer this assumption that Primitive art is merely untrained Naturalism, but until it is conquered there seems little hope for a sympathetic understanding of the symbolist ideal.”

“Every work of art is the child of its age and, in many cases, the mother of our emotions. It follows that each period of culture produces an art of its own which can never be repeated. Efforts to revive the art-principles of the past will at best produce an art that is still-born. It is impossible for us to live and feel, as did the ancient Greeks. In the same way those who strive to follow the Greek methods in sculpture achieve only a similarity of form, the work remaining soulless for all time.”

“Good drawing is drawing that cannot be altered without destruction of this inner value, quite irrespective of its correctness as anatomy, botany, or any other science.“

“Since colours and forms are well-nigh innumerable, their combination and their influences are likewise unending. The material is inexhaustible.”

“Sienkiewicz, in one of his novels, compares the spiritual life to swimming; for the man who does not strive tirelessly, who does not fight continually against sinking, will mentally and morally go under. In this strait a man’s talent (again in the biblical sense) becomes a curse—and not only the talent of the artist, but also of those who eat this poisoned food.”

“Every man who steeps himself in the spiritual possibilities of his art is a valuable helper in the building of the spiritual pyramid which will some day reach to heaven.”

“Form alone, even though totally abstract and geometrical, has a power of inner suggestion. A triangle (without the accessory consideration of its being acute-or obtuse-angled or equilateral) has a spiritual value of its own. In connection with other forms, this value may be somewhat modified, but remains in quality the same.”

“For example, red may cause a sensation analogous to that caused by flame, because red is the colour of flame. A warm red will prove exciting, another shade of red will cause pain or disgust through association with running blood. In these cases colour awakens a corresponding physical sensation, which undoubtedly works upon the soul.”

“Some colours appear soft (rose madder), others hard (cobalt green, blue-green oxide), so that even fresh from the tube they seem to be dry.”

“The adaptability of forms, their organic but inward variations, their motion in the picture, their inclination to material or abstract, their mutual relations, either individually or as parts of a whole; further, the concord or discord of the various elements of a picture, the handling of groups, the combinations of veiled and openly expressed appeals, the use of rhythmical or unrhythmical, of geometrical or non-geometrical forms, their contiguity or separation—all these things are the material for counterpoint in painting.”

“The spectator is too ready to look for a meaning in a picture—i.e., some outward connection between its various parts. Our materialistic age has produced a type of spectator or “connoisseur,” who is not content to put himself opposite a picture and let it say its own message.”

“So long as artistry exists there is no need of theory or logic to direct the painter’s action. The inner voice of the soul tells him what form he needs, whether inside or outside nature.”